During the last week I lived in North Dakota, I had my hair dyed, knowing that once I moved, it would take time to find someone I would trust to color my hair. That day I showed some pictures of my mom to two beauticians: one, the owner of the salon, the other, coloring my hair.  I was bragging about Mom’s hair, coal black hair even into her 70s, hair that once was long enough for the immense  blackness to sooth her like a shawl.  Any gray that threaded into her hair slowly over the years was a soft, rain-cloud gray.

I complained about the fact that my gray hair is as white as snow, so white that while visiting my older brother during a time my hair was in dire need to be colored, my brother, who has difficulty with his eyesight, mistook the whiteness for scalp.  He expressed his sorrow that I was losing so much of my once beautiful hair.

I have lost fullness to my hair, some coarseness too, both absences that continuously threaten my view of self.  I retreat, avoid looking in mirrors even more than I have in the past.  I stare at the beautiful hair of other women.  I become ashamed of all my nakedness.

As a teenager, rolling my hair was almost a daily occurrence, especially during the months of school.  During my senior year, and I don’t remember what month, but it must have been somewhat cold, for I remember the red-orange glow of a fire in the oil stove that sat in the middle of the north side of the living room, a little ways from the television that we often rolled  from place to place but at that time sat across from the sofa fairly close to the north wall.  Someone must have brought me back home after a school event, for I wasn’t allowed to drive, or I had a date.  It wasn’t that late; but there was school the next day, and I had to set my hair.  So a glass of water, a rat-tail comb and rollers while I sat on the sofa and watched television, after having turned it down low.

The folks’ bedroom was a small room off to the right; the door to the room open slightly to hear bumps in the night, a crying little brother, an animal in distress.  A man and a woman were arguing on the television.  For some reason I think the program was gangster-type, such as ones in which Peter Lorre starred.  The woman was passive, of course, as usual.  I remember Mom standing in the doorway of the folks’ bedroom looking at me.  I don’t remember if I said anything at all; but Mom did say, “Hurry up, and get to bed,” or something similar.

A few days later I overhead Mom talking on the phone to one of her friends.  I’m pretty sure she didn’t know that I was in the other room. Maybe homework, but usually I was reading something.  She said on the phone, “I thought to myself, “If that guy is going to talk to Karen like that, I’m going to give him a piece of my mind.'”

When I was in the 7th grade, the doctor told my mother that her headaches resulted from the weight of her hair, three huge braids on each side, coiled around one another like some sort of Celtic maze.  Once in a while she would call me to her side and ask if I would tuck in an errant coarse end of a braid, ends that sometimes looked like wires.  The number of  black hairpins, enough to choke a cow, she often said like an invocation. When she took down her braids, one at a time, the hairpins would slowly fill a cereal bowl like ants.  A hairpin every inch or so, especially to secure the curves in the braids.  Once in a while, she would bend back an end of a hairpin, I think to secure it better in the mass of hair.

Her thick, coarse hair did not make braiding difficult, as I  discovered.  Mom would part her hair down the back of the scalp, then break each section into three. When I got older, once in a while she would ask me to braid her washed, damp hair.  The wetter the hair, the tighter the braid.  Arms of farm women do become tired of all kinds the labor, and then again, having another touch one’s hair soothes the mind and soul.

As I braided first one and then the others in the summer or in the heat of the wood stove, to keep strands of hair wet enough to braid tight, I dipped a rat-tail comb in a glass of water and soaked the strands.

I remember the day Mom came back from having her hair cut short, short enough for me to stare until the kitchen seemed to fill with regret.  I felt empty and lost. I can’t imagine what my mother felt.  I don’t remember where Mom first kept the braids after they were snipped off; more than likely on a high closet shelf in the folks’ bedroom, tucked in the back, out of sight.  I do know that when I came across them when I was older, when my fingertips touched them, they felt alive still, but the braids had lost some of their blackness. Mom’s headaches never went away.

In my sophomore year of high school, I’m not sure who convinced me to cut my hair; probably my aunt, my mother’s sister, whose own hair barely covered her ears.  During that summer, I waited tables for my aunt at the restaurant she ran in Irwin, Iowa.  I spent most of that entire embarrassing summer serving burgers and fries and making malts.  I hated my hair for over a year, until I was able to roll it once again in curls.

One other time another convinced me to cut my hair short. My soon-to-be first husband thought my hair was too long, so I cut it short for the wedding. 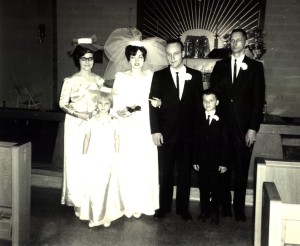 After Mom cut her hair, at first she wound strands in pincurls, beginning at the crown, then curling around the head like a labyrinth.  It wasn’t until later that she resorted to rollers, the same that I use today. But because of its thickness, Mom’s hair held curls for a long time.  My fine hair flattens against the side of my head by mid-afternoon.

When one of the hairdressers saw that picture of my mother, all of us framed around the folks, she said, “Your mother must have some Indian in her, for she’s so dark.” That statement surprised me so, for I’ve been led to understand that Mom is as German as one could get–all German with a little French on a great-great grandfather side.  In response, I said that one of my uncles thought that originally the family was Jewish, pushed out of Russia during one of the pogroms that periodically purged Jewish people from small communities.  I’ve often contemplated such, that forced conversion to Lutheranism was often the way to avoid being uprooted from one’s home in 1800s.  If I ever have the time and the money, I would like to find out.  But that day in the salon, the word Jewish silenced the room. I don’t know why on their part, or even if that word did not cause any silence other than in my imagination or if the silence was the result of the tone of my voice.

It wasn’t until much later I realized why my mother looked so dark in that picture.  Mom had been suffering from problems with her liver, the result of a botched operation when she was in her early 40s and I was ten years old or so. She was losing weight and ill.  Some time later, she was operated on in the Harlen hospital, her ninth operation if I remember, and that problem went away.