A rickety gray porch encircled the south and east side of the two-story 1890s farmhouse, put up in a rush when homesteading, sunk away from the gravel road that ran dusty north to south.  Straight out from the house, the kitchen on the south side, the dining room and parlor on the north, the planks of the porch projected like accordion keys on which once in a while grandpa played his accordion, one that became like detritus lost in the shuffle of families after his death.  Pillars, weathered pine and full of slivers, kept the roof fairly straight, but they caved like dominoes when the house was bulldozed.  Upon this porch grandchildren swung in a wooden swing, swung from the iron links until they were told not to, twirled around the pillars, chased chickens and each other down one side and the other, and jumped off the edges as if they were descending into caverns.  On the porch each with a bowl between their legs, a garden basket full of pods in the center, they podded peas quietly after being subdued with a soft injunction by the grandmother not to eat the peas, standing on the other side of the screen door  that opened to the porch on the east.

The Botna River slid through the farm’s bottom land like a rat snake  on a porch.  Their son  Wayne took a corn knife, berserk from serving in the Pacific, and sliced it into sections like a madman while grandchildren like sparrows watched from their perches in a tree in the yard, the corn knife a blur as it swirled and swirled in the air.  When he stopped, he shook off the fury and snuck like a dog back inside the house. Grandma took a shovel and picked up the pieces and burned them in the barrel. I remember my father and mother watching Wayne silently a distance away.  Later in bits of conversation between adults, we learned that Wayne found the swamps writhing with snakes too much for his mind. What else happened to him, I was never told.  But I was always afraid of him as a child, and grew to dislike him immensely as an adult.

Inside Grandpa and Grandma Snyder’s home, in the living room, in the summer time, an oil stove stood idle on the north wall.  In the spring of 1960, a teakettle hissed upon the pot-belly cast-iron wood stove that sat a little ways from the wall. A small little pot belly, but one that heated the entire house, almost, except for the corners of the bedrooms upstairs and the parlor in the northeast corner, whose door was always shut except when company came, sometimes on weekends to celebrate birthdays, on Christmas and holidays. 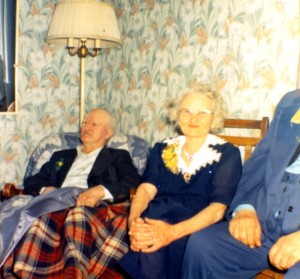 Grandma and Grandpa called that room a parlor, not a living room. The other rooms in the house contained ordinary, everyday furniture, nothing new, all serviceable.  I don’t remember much about the table in the room with the two stoves around which we all sat if having dinner at Grandma’s place, and I don’t remember many times we all sat around that table.

My grandpa, Francis Snyder laid upon the bed in the one bedroom on the main floor, in the northwest corner.  In that bedroom in any time of year one could hear farm animals, especially the chickens that roamed freely around the yard most of the time.  In the summer time, the cackling of the chickens were comforting to Grandpa, I would think for those ten years that he lived mostly in that bed after his stroke.  Whenever any of us entered the house, from the time he had the stroke on the night of my oldest sister’s wedding, we first had to say hello to Grandpa.  Always the rule, not from Grandma, but from my mother.  Straight to the bedroom to say hello.  The stroke left him paralyzed on the right side, his arm dead weight.  Grandpa had some feeling in his face, for he jostled with us, teased us, asked us questions.  Often he would be sitting up when we came, or Grandma would follow us into his room and help him sit, or we would. Because of his stroke, the Grandpa’s nails would grow long and tough.  Cutting them with a clippers that seemed like one to use on pigs was we kids’ job; in fact mine most of the time.  From the time I was eight until he died, I cut his nails.  His right hand was stiff, but he could lift it out of the covers and hold it in front of my while I took the clippers and cut off the edges of his nails. The fingernails were easy; the toenails were tough.  When I was done, he often would squeeze my hands with his left one, and saw something like “Appreciate it.”

Grandpa has his stroke on the afternoon of my older sister’s wedding, but no one other than my grandmother knew.  Like all who farmed then, a wedding at night still meant that plowing had to be done when it needed to be done.  Grandpa farmed with horses, and so did my father much of the time throughout the years, until the team died, sometime in my sophomore year.  Grandpa also had a stallion that he kept in the barn.  My older sister has told me often that stallion was wild and mean, but I’m sure that Grandpa handled him adroitly.  There didn’t seem to be ever a question that Grandpa couldn’t do something, and do it in such a way that his actions were rather revered. The Grandparents’ kitchen was small, set by the door that went into the room with the pot belly stove. A cast iron stove was on the north wall, replaced in the later years with a gas one.  Grandma would take a stick of kindling and put it in the blazing fire, and not burn a tip of a finger.  I watched her and tried to imitate her whenever I could.  When I hired out in my sophomore year to a family for $10 a week for one week until my father said I couldn’t stay there no more.  Like my grandpa, my dad was a person of few words, never did explain the reason why to me, although I was uncomfortable with the man of the house.  I slept upstairs the week that I was there, but it was my job to get the fire going in the morning, and I could very well.  The man once said to me that a good woman needs to know how to make a fire.

At that table, Grandpa would drink his coffee, coffee made boiled on the stove. Not thin like some of the coffee I became used to in South Dakota but fairly robust, dark enough not to really see the bottom of the cup.  Grandma drank her green tea. Then he would stir in teaspoons of sugar, so many in fact that it seemed there was more sugar than coffee; then pour the coffee in the saucer and drink it from the saucer.  At that table, I often would play canasta while waiting for something or other to pick me up or to order me to do something.  Until I entered first grade, one of the farm places that we rented was right across the creek on the south side of Grandma and Grandpa’s.  Rather a gully that we crossed with a plank, a plank I remember that when I walked barefooted across it once, a sliver went from the ball of my foot to the pad of the heel.  It hurt a great deal.  On that place, my mother became pregnant with both my younger sister  and my oldest brother, and I was sent to stay with Grandma and Grandpa.

My oldest sister, Betty, was my half-sister, her father dead from tuberculosis when she was five.  Our mother married my father when Betty was eleven.